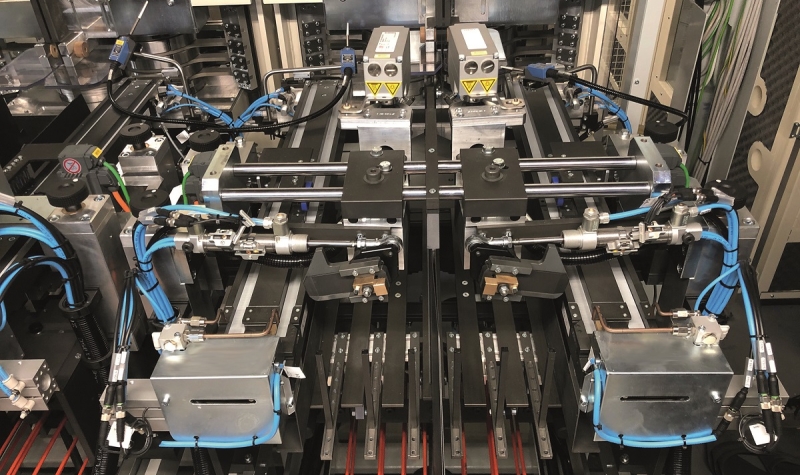 1. The SeGMos in the pack-forming station at the end of the TV 840 tissue line replace the manual equipment

Towards Service 4.0 with automated equipment

Industry 4.0 demands cross-company collaboration. OMET shows how to make production lines fit for Service 4.0. The manufacturer of tissue machinery developed software for the remote operation and remote maintenance of its plants. The foundation for the regulation of individual systems via HMI was laid by the positioning system from Lenord + Bauer, which enhances user friendliness and supplies data for condition diagnostics.

Intelligent and digitally networked systems form the basis of Industry 4.0 concepts. The dovetailing of modern information and communication technology with proven control concepts opens up new possibilities for self-organised production, resulting in self-optimising systems. Whether these will ultimately act completely autonomously or serve as support systems suggesting optimisation measures to the human operator cannot yet be determined. Whatever the case, data and messages must be forwarded to the decision-making instance in real time. It must also be possible to execute the necessary technical interventions without manual action. That is how digitalisation is driving the automated operation of machines. 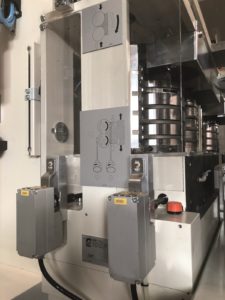 2. Each folding cylinder of the TV 840 is adjusted automatically by a separate GEL 6109 from Lenord + Bauer

The future lies in digital added value
The market leader in tissue converting machines, OMET, is also putting its faith in modern and efficient operating concepts. Service 4.0 is the name given to the vision of the Italian tissue specialist implemented in its Intelligent Plant Software. The software from Italy is geared towards the support tools, because it identifies trends in the machine data and reports them to a service body. Statistical analysis of the data allows recurring critical conditions to be detected at an early stage, enhancing the efficiency of the converting line through targeted interventions. Using the data trends, the personnel can immediately identify the cause of an alarm or warning, track the operating behaviour of the machine and initiate countermeasures where necessary.

Oberhausen-based Lenord, Bauer & Co. GmbH takes a similar approach with its i³SAAC product concept. The specialist in motion sensors and integrated drive technology supplies products that support Industry 4.0 applications on three levels. At the bottom level is the hardware. As far as the Oberhausen company is concerned, autonomous actuators and controllers as well as integrated, intelligent and interactive sensors are essential if digitally networked subsystems are to be formed. Interfaces, communication services and tools for commissioning and function testing establish a link to the digital world at integration level. At system level, the company supplies software and digital services that make the life of machine manufacturers and operating companies easier. Both companies are receptive to sustainable technologies of the future that offer their customers digital added value.

Automation is key
What this looks like in practice is shown by the following example of OMET’s tissue converting line. To ensure it could implement Service 4.0 in its TV840 converting line as well, the company equipped several machines with the fully automatic positioning system from Lenord + Bauer. The plant turns huge reels of hygiene paper into refined napkins, producing up to 5,000 units a minute in multiple steps. From unwinding, printing, embossing, rewinding, folding and cutting through to bundling, the line performs all operations along the process chain. The folding and pack-forming station at the end of the line had previously been controlled manually. To enable the Service 4.0 tasks, compact positioning drives delivering torques of 2.5 or 5 Nm now handle this task together with video cameras. A total of 12 SeGMos of type GEL 6109 are installed in each line. Four drives are connected to a decentral control unit, so each drive only needs one plug-&-play hybrid connection cable. The plug-&-play solution both ensures internal communication and delivers the power between the electronics box and the drive. Each positioning drive is a complete mechatronic unit comprising gear, micro-controller, motor and absolute position sensor. The positioning drives were installed directly on the relevant axis by means of a hollow shaft. A torque support prevents the drive from rotating in operation and acts as a moving bearing by compensating for any axial play in the axis. After installation, the assembly staff in Italy used the support tool provided by the German supplier to verify that the drives were working properly. This software works without being connected to the plant control. Every single axis was set up with the SeGMo-Box via an USB interface. Only then did the specialists connect the system to the Simatic S7-1516F from Siemens.

Saving time – not only during format changes
To integrate the system into the S7, the PLC experts in Lecco used the Step 7 function blocks of Lenord + Bauer. These templates generate the traversing tasks needed in order to control the drives and transfer status data such as motor current, absolute position, device temperature and thresholds to the PLC. A PROFINET interface allows each box to communicate with the control system and forward the destination data to the drives. Each drive uses the movement command to control the speed of the relevant axis independently. The positioning system forms a sub-network, relieving the network of the machine. The separation of the motor and logic supply lines in the connection cable of the drives means that both communication and the diagnostic functions are retained even if the power supply to the motor is switched off.

The tissue machines can now be set manually with the HMI terminal without having to open the safety cabin. The automation of the TV840 with the SeGMo-System turns the operator terminal into the control point, simplifying operation. Changes in speed or starting and stopping are triggered simply by pressing the button, as can changes to the product size and folding as well as their adjustments. In the past production had been interrupted by opening the safety devices every time a change was required. The new operating concept does away with this; the operating personnel store the settings in a recipe management system. That both prevents adjustment errors in operation and guarantees maximum repeat accuracy, which in turn boosts throughput rates and enhances the quality of the napkins produced. What is more, the SeGMos provide key data about the condition of the folding and pack-forming unit. Digitalisation of the TV840 line optimises the efficiency of the machine and ensures greater process reliability.

Industry 4.0 demands more than networked systems
The cross-border cooperation between the two companies is continuing, with OMET planning to upgrade its machine technology further towards Industry 4.0. Lenord + Bauer, too, will expand its product range in this segment, such as with software that enables remote access to the positioning drives. The possibilities of condition monitoring by remote maintenance are currently undergoing intensive testing in Oberhausen. The real-time-capable communication and exchange of data between sub-systems are just one step towards full digitalisation. Information on the condition of machines and their components plays a key role in the complete production process. Tests are currently ongoing to determine which additional data the positioning system can supply so that the maintenance intervals of the tissue line can be optimised, for instance. As the example shows, Industry 4.0 does not just mean the networking of components and systems, but also demands comprehensive cooperation between operating companies, machine manufacturers and system suppliers.

3. Service 4.0: both the OMET Intelligent Plant Software and the web interface from Lenord + Bauer offer the customer digital added value 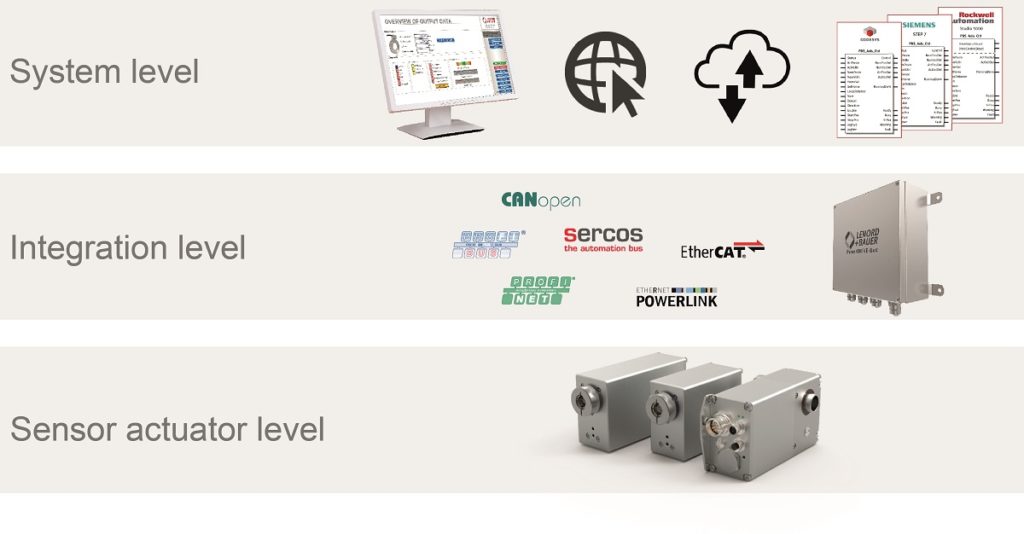 About OMET:
OMET is an Italian group that manufactures machinery for printing labels and packaging as well as tissue converting machines. The group has brought more than 1700 projects to a successful conclusion since it was founded in 1963. The Tissue Converting Machines business unit is based in the Italian city of Lecco. The product portfolio includes 5 main machine lines for the automatic production of disposable table napkins, paper towels, non-woven products and place mats.

About Lenord, Bauer & Co. GmbH:
We are an international specialist in the field of motion sensors and integrated drive technology. We develop, produce and distribute technology-leading solutions for the mobility and machinery sectors. Our activities are focused on railway rolling stock, machine tools and packaging machines. Our customers have been benefiting from our considerable technical consultancy skills and expertise in customer applications for more than 50 years.
Lenord + Bauer is certified according to DIN EN ISO 9001 and 14001, as well as IRIS. 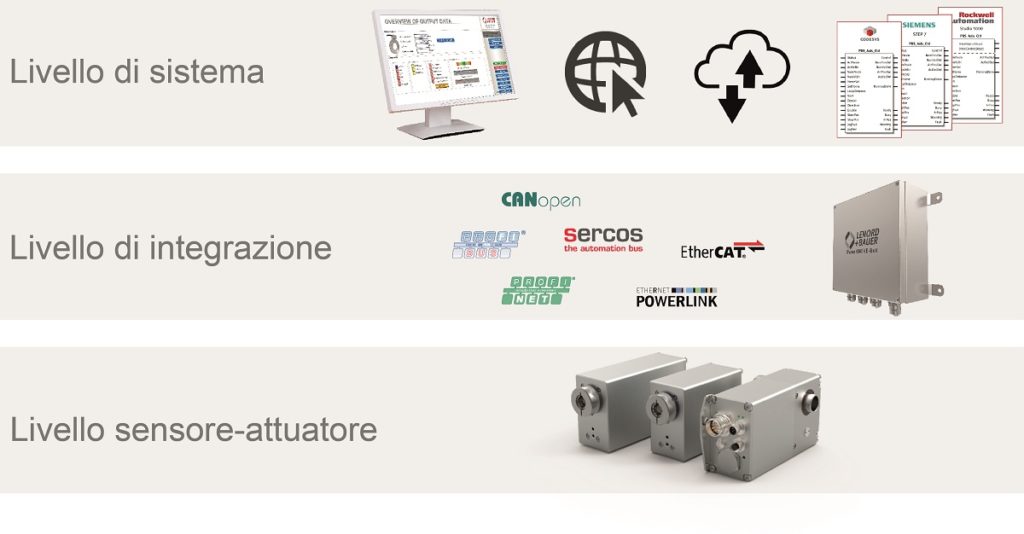 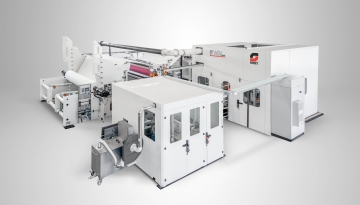 After the presentation of the ASV Tornado Line during the “OMET Interfolding Experience” open house, organized in October 2019 at its OT Lucca premises, OMET introduces the ASV Line Storm to the market, with a […] 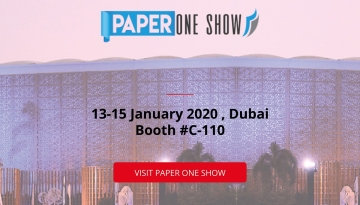 Paper One Show 2020, OMET to present facial tissue and other innovations

OMET will bring its outstanding technology in the field of tissue converting at the Paper One Show 2020, to be held at the Dubai Intercontinental Festival Arena (UAE) on 13-14-15 January 2020. OMET staff will […]

Technology, product and people: this way OMET invests in the future