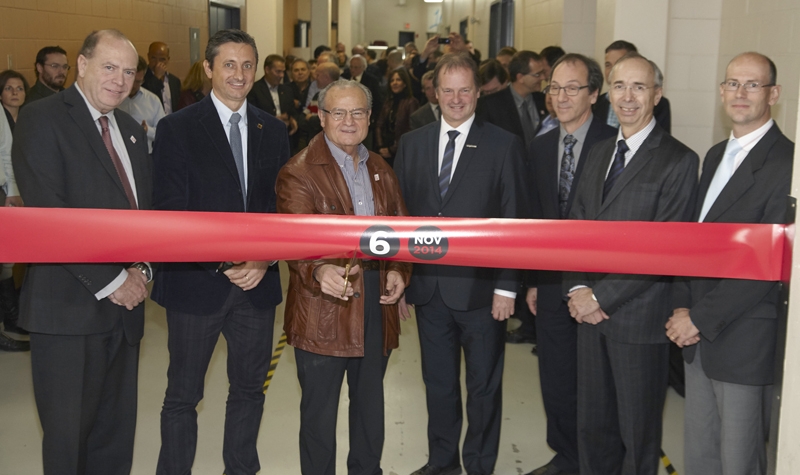 On Nov. 6, 2014 the official Opening of the Print Workshop of the Printability and Graphic Communications Institute (ICI) in Montreal, QC, Canada gave the invited guests the possibility to admire the newly installed Varyflex V2 multi-process printing machine by OMET. Over 300 people attended the event including many local authorities.

Watch the Video of the Opening Ceremony: https://www.youtube.com/watch?v=OkekMBI38RU

The ICI’s newly-acquired printing press, made in OMET workshop in Lecco, Italy, is one of a kind. It is a Varyflex V2 platform in-line multi-process press and it has been adapted to the needs of ICI and its partners. Its main characteristics are the full interchangeability of the printing processes and the greatest register accuracy.

This press is made for real production. It has no workshop size and had to be transported by sea inside 4 containers 14 meters long . “It’s not some laboratory equipment,” confirms Régent Bernier, the director of ICI’s flexography department. “It’s a choice we made in the beginning. We wanted something close to the reality of printers to be able to easily transfer the prototypes.” The new equipment, which allies expertise in printability, formulation of inks and printing techniques, allows ICI to offer a specialized service that is tailored to printers and industrialists who want to develop new printed applications for electronics or other fields. That aspect is crucial to his partner, Michel Martineau. “We wanted to get closer to manufacturing and not make something that exists only in a laboratory,” says the expert in printing techniques. The press is an industrial machine that will be used for research projects.

The new press is different from its counterparts in the industry because of its multi-process functionality, combining so many printing processes on a single machine. The new press is able to go from silkscreen printing to gravure or flexography in the order needed to make the prototypes. “We needed a unique flexibility,” explains Régent Bernier. “We can print thin plastic films or thick cardboard, but also paper on the same printing press, and use three different printing processes in 5 stations.” The printing press was made so that additional units can be added to allow ICI to offer more possibilities.

One of the goals is to add something more than color to printed products and the final goal is to give them functionalities. “Conducting current, changing colors or ensuring a controlled release of an active substance” are examples of processes given by Christine Canet, director of ICI’s consulting services and applied research. According to her the goal is to target applications that are made for rotary presses and that are both innovative and industrial.

The team behind the project wants an accuracy of positioning of register that does not exist yet so to increase the possibilities that the printing press offers to companies. Changes will be made to the printing press in association with OMET to reach the desired results under a 3-year partnership contract. “Together, we will push register accuracy to the limit of technology,” says Ms Canet.

Alain Bergeron, ICI’s director of business development, says that it is important to have a quick turnaround while keeping the costs as low as possible. According to Ms Canet, the savings are due to the efficiency of the process and the fact that the printing press can print products that are really different on the same production line. “The printing processes allow us to put the substance exactly where it is needed,” says Chloé Bois, ICI’s projects manager. The printing press will also allow ICI to reduce ink consumption. Since the inks developed in laboratories can costs hundreds or thousands of dollars for one kilogram, the new machine was developed so that it could work with small amounts while minimizing waste. “That’s also unique,” explains Christine Canet. “We want people who come try it to be able to recover the unused product. It’s a huge advantage.”

The expertise of the Institute in the entire graphics chain is another great characteristic of the project. “There will soon be new applications, with products in development, and our role is to make them functional in reproducible conditions. We have been making tests on press for years. It’s one of our strengths.” According to Christine Canet of the National Research Council (NRC) this great expertise is of great help. “This machine shows the Canadian collaboration,” she explains. “Furthermore, the manufacturer, OMET, is more than just a supplier. It is also a partner that will be part of the adventure for the next three years. “It is a big player that has decided to invest in modifications to enter into a highly-specialized market,” says the director of consulting services and applied research.

The history of print is intrinsically linked to evolution in societies because it has (among other things) allowed the transmission of ideas, the access to information, and the preservation of texts. This joint evolution continues and new possibilities are appearing with printable electronics, which transform this means of communication into a communications technology. For example, says Ms Canet “We can include “intelligent” packaging. It is possible to add a coat of varnish that has unique characteristics, tricks that make counterfeiting more complicated, or solar panels. Everything is possible.”

Printable electronics includes all electronics systems, subsystems, and components produced using low-cost coating, patterning, and printing processes with inorganic and organic materials. The potential global market for printable electronics, developed using conventional printing, is expanding with a diversity of applications including flexible solar cells, batteries, sensors,  lighting products, smart packaging and displays, most of which can be produced by a combination of printing processes onto a flexible substrate.

New materials are created every day and their characteristics offer great opportunities in every technological field. That influences the products used every day. The electronics field is really fond of these new materials and some of them are used in printed electronics. But that means transforming them into a printable material. That’s why the mission of ICI on OMET’s press is to transform them into ink and to control all aspects of the printing processes, while keeping the targeted properties. That is a big and interesting technological challenge for ICI. Another challenge is the need for some applications to superimpose many of those unique inks to get a combination with new properties called “multilayers”.

Prints of the Future

The newly-acquired Varyflex V2 printing press goes beyond print. It opens the doors to a myriad of new functionalities that will help the progress of the printing world, and the resurgence of the industry. “The Institute’s positioning is to be the terminal station,” says Mr Bernier, Director of ICI. “We want to make the industrial prototypes and help companies. In the next years we will see the development of packaging with the ability to communicate, especially with smart phones. This technology, called ‘near field communication (NFC)’, will use printed chips.”

“OMET and ICI share the same approach based on the Passion for a technology that is in real support of the converters, and the same target: Innovation to create in synergy new opportunities for the market,” concludes Alberto Redaelli of OMET.

The project is the result of the joint work of ICI, OMET R&D and the US-based sales staff of Matik, OMET’s North American distributor, and Italy-based sales staff of OMET represented by Alberto Redaelli, International Sales Manager, that was at the side of ICI Directors at the cutting of the ribbon in Montreal.

The project is financed by the Canadian Foundation for Innovation, the Ministry of Higher Education of Research, Science and Technology and the National Council for Research of Canada (CNCR).

ICI has been created by the Ahuntsic Collège, a publicly funded pre‑university College of Québec, in 1992 and recognized as the College technology transfer center in 1996. 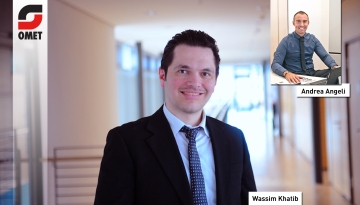 OMET strengthens its presence in the Middle East

The recent successes both from a commer-cial and technical support point of view in its area of competence, led OMET to expand the countries in charge to our agent Mr. Wassim Khatib: currently taking care […] 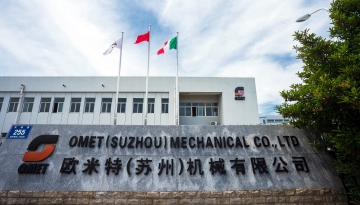 Fabio Valle (OMET Suzhou General Manager), speaks of a year of change, which has seen the market upset due to the pandemic, to which OMET Suzhou is responding with a long-term strategy, which focuses on […]

OMET strengthens its presence in the Middle East